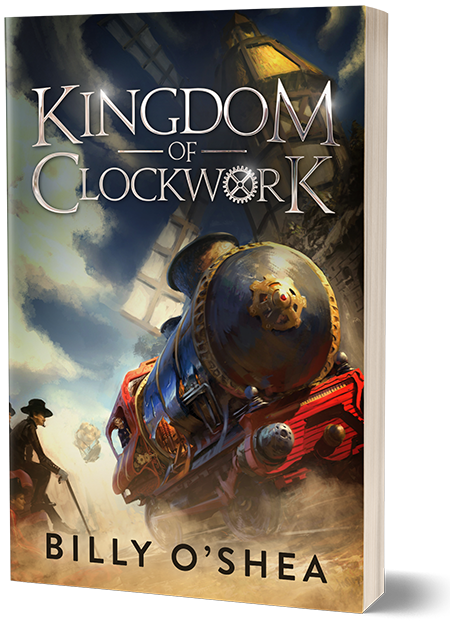 Kingdom of Clockwork is a science fiction/steampunk novel by Billy O’Shea. The story takes place in a quasi-medieval society that arises in Scandinavia after the new Dark Ages. Lacking fossil fuels and knowledge of past technology, the new kingdoms of the northern lands can only draw upon the power of the wind, which they store using clockwork. But the King of Kantarborg has a plan to mine other secrets of the past, and weaves a young court clockmaker into his dangerous schemes.

Kingdom of Clockwork has been described as “alternate history, historical fantasy and steampunk”. It is a quirky, intriguing, slightly whimsical tale of reason, magic and human cunning. The story combines real Scandinavian history and locations with flights of fancy, both literal and metaphorical.

What the reviewers say:

My best surprise of the year. Had both Kingdom of Clockwork in the Kindle for a long while. Finally last weekend, I started reading the first book. Couldn’t put it down. Didn’t stop until after dawn.

It is a novelty to have a steampunk book set in Scandanavia, and this one makes the most of the setting. Readers who appreciate good spelling and grammar, and just plain good writing will find no nits to pick here. The story ends up with satisfying finish, but leaves room for a possible sequel. I hope there will be one.

For me, this is a strong read. It invokes thought. Questions. I would stop reading just to consider the concepts O’Shea was bringing to mind, then jump back into the story to see what the characters thought about the same theories. Was I right? Could there be a right answer?

Overall, this is a great steampunk novel and it is deep. Really deep. Pick it up, but don’t fly through it. Think about the questions raised by this intellectual read.

And enjoy every minute of it.

Great book. This and the sequel are the best novels I’ve read in a long time.