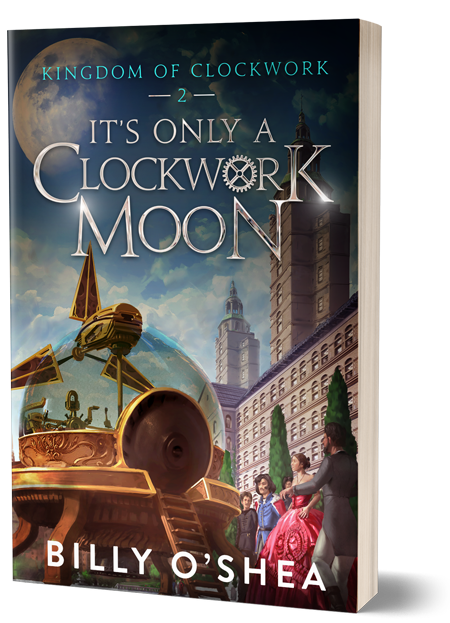 It’s Only A Clockwork Moon

In a future Denmark, Karl Nielsen, Royal Clockmaker, is recalled to the Round Tower to design the King’s most ambitious project yet – a vehicle to travel into space. The second book in the Kingdom of Clockwork series is a quirky, humorous tale of Nordic monarchs, Irish monks, jazz records, airships, submarines, spacecraft and conspiracies.

After having KofCK and Clockwork Moon sitting for a while on the Kindle, once I started the first book I couldn’t stop until I read both books and he sun was up again! Thank you Billy for an unforgettable and delightful read! – Hector Gayon, Amazon

After his explosive debut in  Kingdom of Clockwork, Billy O’Shea really hits his stride in the sequel. Where we left our hero, he had turned his back on the intrigues of statecraft and the misfortunes of war to exercise his profession as clockmaker in a quiet little town. Too quiet, of course. Billy O’Shea’s wind-up world has grown, and now ticks with multiple plot lines, all of them suspenseful, and new cultures and subcultures. Wheels within wheels! – A. Crawford, Amazon

Page-turning, political, clockpunk, quick reads with lots of crazy ideas and insane worldbuilding. Highly enjoyable. […] If you want to read a different take on steampunk, then you should give these a read! – Sidsel Pedersen, Goodreads