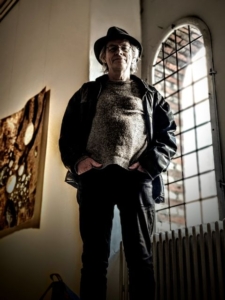 Billy O’Shea was born in Prick End, Kent (now prudently renamed Chislehurst West), and grew up at an airport on the west coast of Ireland.

He studied at Trinity College Dublin and Mountjoy Prison, but dropped out of both before completing his education. He then briefly pursued a career as a live broadcast saboteur with the Irish television station RTE before being washed out of the country in the great emigration wave of 1980.

He landed in Denmark and struck out as a ballad singer at night, while living a double life as a student in the daytime.

In 2000 he was awarded a gold medal by the University of Copenhagen and shook hands with Queen Margrethe. After that he refused to shake hands with anyone else ever again, for which reason he was denied Danish citizenship in 2022 and sought asylum in Svalbard, near the North Pole.

He has written several novels, which have been translated into Finnish and Chinese, to the puzzlement of many. His work is not recommended for the sound of mind or adults above the age of 80.

He is married to a scientist and has three children.

Black Swan is the imprint under which we publish the Kingdom of Clockwork books. The black swan, eala dubh, has been the totem and symbol of the O’Shea clan in Ireland since the Dark Ages. It is therefore an appropriate trademark for Kingdom of Clockwork, which has always been very much a family affair for the O’Shea family, involving not just Billy’s writings but also the revolutionary VR experiences created by his son Christopher, which allow readers to enter the world of the books.