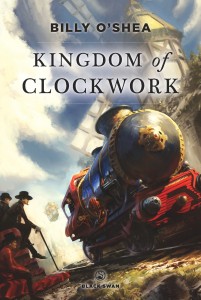 Kingdom of Clockwork is a series of science fiction/steampunk novels by Billy O’Shea, set in a clockwork world that arises in Scandinavia following the collapse of civilisation.  Lacking fossil fuels and knowledge of past technology, the new kingdoms of the northern lands can draw only upon the power of the wind, which they store using clockwork. But the King of Kantarborg has a plan to mine other secrets of the past, and weaves a young court clockmaker into his dangerous schemes.

The Kingdom of Clockwork series has been described as “alternate history, historical fantasy and steampunk”. The books are quirky, intriguing, humorous tales of reason, magic and human cunning. Real Scandinavian history and locations are combined with flights of fancy, both literal and metaphorical.

Billy O’Shea is an Irishman who has lived in Scandinavia for more than thirty years. Among his sources of inspiration for Kingdom of Clockwork, he cites Hans Christian Andersen, the Irishman Jonathan Swift and the 17th-century English science fiction writer Francis Godwin.

The Kingdom of Clockwork series is available as paperbacks, audiobooks and e-books. The e-books are available from Amazon, and the audiobooks from Audible, Mofibo, and most audiobook publishers. The paperbacks are only available at this site and at a few selected bookshops. They can also be purchased in the gift shop of the Round Tower of Copenhagen.

You can hear extracts from the audiobooks here.

The paperbacks will not be made available through Amazon until conditions for Amazon warehouse employees are greatly improved.

You can hear an extract from the audio book here: